What is ABA Therapy?

HomeAchieve Beyond BlogWhat is ABA Therapy? 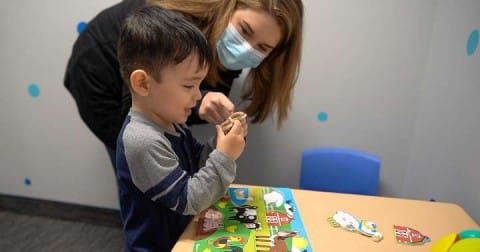 In the past twenty years, ABA therapy has become a popular, effective, and surgeon-general approved therapy for Autism Spectrum Disorder, or ASD.

What Exactly is ABA Therapy and What Does it Stand For?

ABA stands for Applied Behavior Analysis, which is the science of learning and behavior. Behavior analysis helps us to understand behaviors, why they are occurring, how the environment can influence behavior, and how we learn new behaviors.

What is Behavior Analysis?

Behavior Analysis is a relatively new field of psychology, formed in the early 20th century, and based on the works of Thorndike, Watson, Pavlov, and the grandfather of ABA B.F. Skinner. Behavior Analysis posits that humans are not inherently good or evil, but instead learn from the conditions of their environment.

It studies operant conditioning, meaning that it looks at the association made between a behavior and a consequence (action that occurs immediately after a behavior), and how that can be influenced in the future. For example, a salesperson has an exceptional month of sales figures (behavior) and receives a sizable performance bonus (consequence), so we would infer that the salesperson would continue to perform at a high level in hopes of receiving another bonus in the future.

This consequence of a bonus would be considered reinforcement, a major component of ABA therapy. Operant conditioning also works in the opposite way, in that it may also punish a behavior, or reduce the probability of it occurring again in the future. Getting a speeding ticket as a consequence of speeding and then reducing your instances of speeding in the future would be one example. Applied Behavior Analysis takes these principles of reinforcement and operant conditioning and applies them to the real world.

The concept and definition of behavior is central to ABA. Behavior is anything that an organism does. It is an action that is observable and measurable, and is how the organism reacts to its environment. Behavior Analysts state that a behavior must pass the “dead man’s test,” in that if a dead man can do it, it is not a behavior. For instance, getting one’s haircut is not a behavior (a dead man can do this), but texting a friend while getting a haircut is a behavior.

Behavior is our actions, rather than our intentions (which cannot be observed). If we can observe and define a behavior, we can also observe the “befores” and “afters” (antecedents and consequences) to make changes. Our behaviors continue or change because we have been reinforced in some way and learned to continue them.

So, when someone compliments me on a shirt I’m wearing (a consequence to my behavior of choosing that shirt to wear), I wear it more frequently (it reinforces my behavior of choosing that shirt). Anything can be an antecedent or consequence, and often times it may not be obvious what exactly changed our behavior, and that is what ABA tries to identify and help organisms (humans, animals, even plants) to improve their behavior.

How ABA is Used

Applied Behavior Analysis is used in so many areas of life besides therapy for children with autism. ABA is used in organizational behavior management, safety in the workplace, higher education, clinical therapy, aging, curriculum development, animal training, parenting, environmental protection, and health and fitness. In each of these fields, the underlying principles of behavior analysis guide practitioners and researchers towards finding effective solutions for the world’s problems. Behavior Analysts look to enact changes before or after a behavior occurs to hopefully drive positive behavior change.

Since ABA can benefit anyone looking to change their behavior, researchers began studying the effects of ABA on teaching children that had not been successful in a typical school setting. In the 1960s, ABA therapy was developed by Dr. Ivar Lovaas and it garnished highly successful results. Since then, ABA therapy has taken the principles of reinforcement, changes in the environment, and differential reinforcement to help children build new skills. It should be noted that many of the techniques initially used in ABA are no longer used as best practice, and clinicians today focus on using positive reinforcement and motivation to help children learn.

Many children with ASD, ADHD, and other diagnosis can benefit from ABA therapy. ABA therapy finds ways to identify behaviors that impede a child’s daily life or safety, and sets out to replace them with functionally equivalent behaviors that will help them to communicate more effectively and become more independent. For example, teaching a child to request a break by pointing to a picture during homework, instead of them ripping their homework when they are frustrated.

The beauty of ABA therapy is that it is individualized for each learner. Board Certified Behavior Analysts (BCBAs) work with the client as well as the family and support network in order to determine what skills should be focused on, what the client’s strengths are, and how to best teach the new skills. Some learners may benefit from a highly structured environment, while others flourish in a natural learning environment. ABA therapy finds ways to incorporate teaching into the environment where your child learns best. ABA therapy targets many skill areas such as improving communication and social skills, increasing the ability to remain on task, completing daily living skills, and even vocational learning.

How Do We Know ABA is Working?

Teaching the client skills in a motivating and reinforcing environment is a large part of ABA therapy, but how do we know if it is working? ABA therapy creates “programs” or “goals” to practice frequently with children, and the behavior therapist (also known as technician) scores the child on each practice trial, which leads to a score at the end of each session. A client may have a score of 80% on finding the cat picture amongst three animals, which means they correctly found the cat eight out of ten times.

The scores are graphed daily so that progress on the goal can be objectively decided upon. Mastery criteria is determined in advance so that we can accurately determine when a new goal can be introduced. A client may have many goals practiced within one ABA session, and frequent practice of those skills is recommended. This is why ABA therapy sessions are usually recommended for between 10 and 30 hours per week for a client, as determined by a BCBA.

Quality ABA therapy providers will collaborate with the client and their family to determine the best goals and learning environments for the client, work on generalizing skills to the family (so learning is continued and maintained), provide the client and family with frequent progress updates, and teaches your child in a fun environment so that learning is reinforced. It seeks to help the client to increase their independence and happiness through identifying reinforcers in the client’s life and teaching them how to more effectively access them, all while having fun and being in a motivating environment.