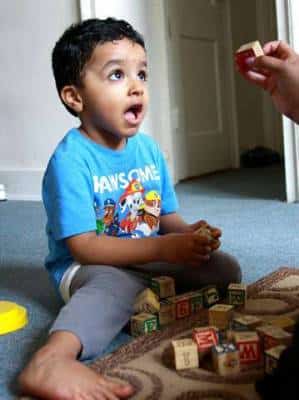 As Speech Language Pathologists we need to be aware of some behavior/signs that children on the Autism Spectrum might have. It does not mean that every child with Autism will present these behavior/signs, but most of them will prompt us to make an accurate observation on the child’s responses to make the proper referral for an evaluation which can lead to an appropriate diagnosis.

As Linda Watson, Ed.D.,CCC-SLP Associate Professor from the Division of Speech and Hearing Sciences at the University of North Carolina, Chapel Hill, NC wrote in different articles familiarity with the literature about the early development of children of Autism will improve the ability of professionals to appropriately diagnose and intervene young children who may have a form of autism.

Sensory processing, attention and self regulation: Many symptoms, reflective of sensory processing and / or attention disturbances are present among children on the spectrum. Among these symptoms are hypersensitivities to sound, aversion to social touch, avoidance of certain food textures, lack of response to pain, poor orientation to visual stimuli, and over focused attention with sensory features of objects (e.g. spinning objects, licking objects).

Praxis and imitation: Imitation deficits are evident in the youngest children with confirmed diagnoses of Autism, and those skills impact the gesturing development of every child as a precursor of verbal language.

Communication: Comprehension problems impede the child’s progress in social interaction and expressive communication. Eye contact, which is reduced in young children with Autism, will affect in regulating their communication as demonstrated by reduced babbling in early development. Another behavior which points to a diagnosis of Autism is when a child manipulates another person’s body (eg. placing another person’s hand to obtain an object). A lack of pointing is one of the key items for 18 month old children who are at risk for Autism. Limitations in the ability of young children to engage in joint attention have proven to by highly reliable in helping to distinguish the children who may have Autism.

Play: Play skills in children within the spectrum are characterized by less proximity to peers, reduced level of social initiations, fewer social responses, lack of pretend play and isolated play. Difficulties in social skills and joint attention may reduce levels of engagement in social play.

Motor features and stereotyped/repetitive behaviors: There is evidence that some children with Autism without cognitive delays may exhibit unusual postures, clumsiness, and motor planning problems. Two of the hallmark features of Autism among others are repetitive/ stereotyped behaviors (e.g. arm/ hand flapping, toe walking) and ritualistic behaviors (e.g. lining up objects)

In the article “The first year inventory: Retrospective parent responses to a questionnaire designed to identify one year-olds at risk for autism” by Linda R. Watson and others from the Division of Speech and Hearing Sciences at the University of North Carolina-2007, establish the need to identify one year old children in the general population who are at risk for atypical development and additionally, to highlight children whose risk patterns seem most suggestive of eventual Autism. This screening instrument is not ready for clinical use yet and is limited to research use at this time

We as Speech Language Pathologists can observe the children’s behaviors among the following domains to make an evaluation referral which might suggest the risk of Autism:

Observe the children behaviors, document those behaviors and make the proper referral for an evaluation. An adequate diagnosis of autism might turn into an early treatment.

Research indicates that children who receive early intervention before three years of age are more likely to demonstrate greater gains in language and communication development. From a clinical perspective, evidence suggests that early treatment lead to better outcomes for the child.